Menstruation is a daily reality for millions of women and girls around the globe. A natural biological process, which should dignify women and girls, have become a subject of shame that is rarely discussed. This silence is largely connected to the several myths and stigmatisation surrounding menstruation.

Despite the advance in globalisation, several cultures around the world still vilify menstruation and see menstruating women and girls as “dirty” and “impure”. Recognising the negative impacts of such discrimination on the millions of women and girls who see their monthly cycle, Hope Spring Water Charity foundation has committed to break the silence and shut down myths and taboo associated with menstruation.

Hope Spring Water Charity Foundation initiated the Pad-A-Girl Initiative in 2017, under its Pad-Bank Project, to serve as a platform to end period poverty in Nigeria. One of the major objectives of the Pad-Bank project is to promote menstrual hygiene amongst poor and vulnerable girls in Nigerian schools and communities. Since its inception, over 20,000 women and girls have been directly and indirectly empowered, through menstrual hygiene management (MHM) workshops in schools, health care centres and communities. 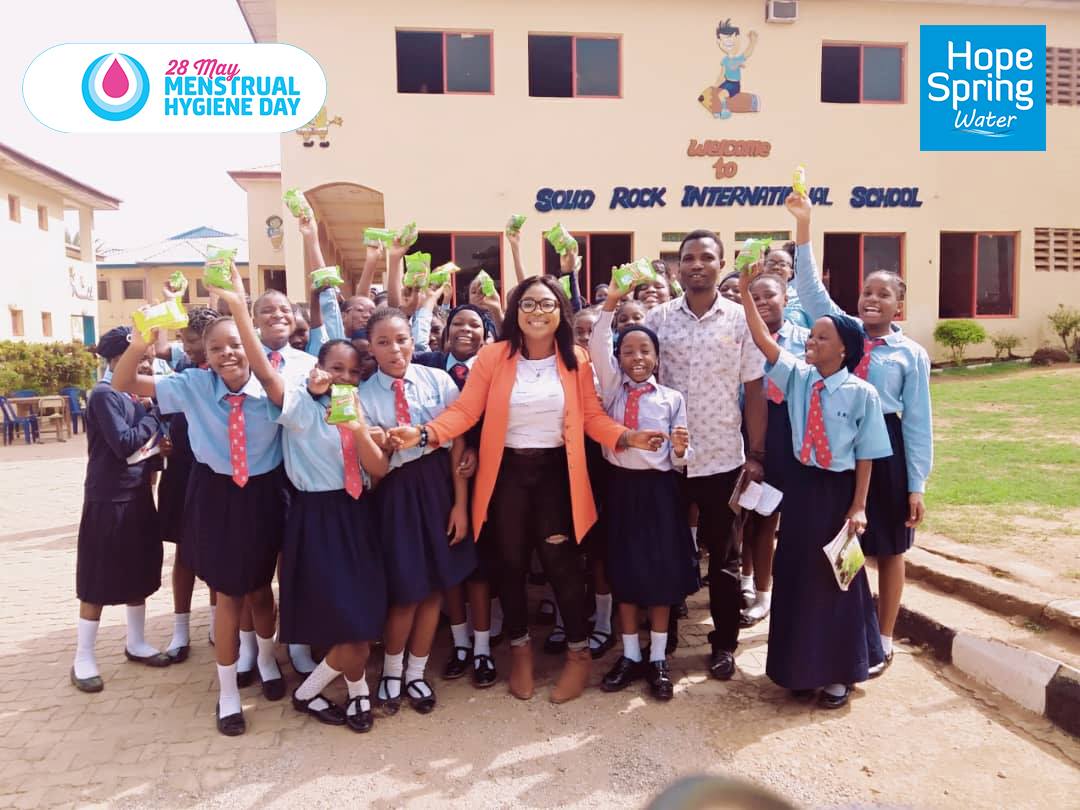 Building on the success of the previous workshops, through its partnership with Lady Care Nigeria, Hope Spring Water Charity Foundation held MHM workshops in ten schools across five locations in Nigeria to mark the 2019 World Menstrual Hygiene Day, themed; “it’s time for action”. These workshops were held simultaneously across the various locations on May 28, 2019. The workshops, which were interactive sessions aimed at breaking the silence surrounding menstruation, entailed focus group discussions, question and answer sessions, indepth interviews and one-on-one discussions. The sessions were facilitated by medical experts from both private and public sectors, with the support of volunteers of Hope Spring Water. The workshops, provided a platform for participants to share their experiences and challenges about menstruation as highlighted below:

“I was lucky that my home economics teacher taught us about menstruation just two weeks before I saw my first period. I live with my uncle, and when I saw my first period, I wasn’t scared but I couldn’t afford sanitary pads and so I got stained. It was so embarrassing and my uncle would give me awkward looks when I would serve him food, and that is when I knew that I got stained again. I was always worried whenever my period is coming close.” – Bella

“When I am seeing my period, I don’t go to church because I was told that when you are seeing your period, you are unclean. So my parents and siblings leave me behind at home.” – Esther

It is evident that most women and girls face several challenges during menstruation such as; inability to afford sanitary pads, lack of sanitation and handwashing facilities in schools, stigmatisation from the male peers, and discrimination due to certain taboos and myths attached to menstruation. These challenges are dream-killers for most of these girls, who are not well empowered to surmount the challenges they face during menstruation. The participants, which included both boys and girls, were empowered with the right knowledge to shut down most of the menstruation myths and about 6,000 Lady Care sanitary pads were distributed.

The highlight of the workshops was the making of menstruation bracelets by the participants. The bracelets were made with 28 beads, inclusive of 5 red beads to symbolise the menstrual cycle.

In order to sustain the progress made by the workshops, Hope Spring Water Charity Foundation, established WASH clubs in the various schools. The WASH Club will serve as a platform to continuously engage the students on MHM and raise menstrual hygiene champions who will serve as change agents to demystify menstruation myths and taboos in their respective schools and communities. The members of the WASH clubs will also drive the campaign to provide adequate sanitation and hygiene facilities in their schools, so that school girls will have a convenient place to change and clean up during menstruation. This would in no small measure, enhance equity, self-confidence and eradication of long-standing discrimination and societal norms that reinforce traditional roles and prejudice against the girl-child.

Hope Spring Water Charity Foundation is committed to reaching more schools and communities across the country and is open to partnership with organisations, that share similar vision and are passionate about imparting lives through WASH advocacy and education