A Green New Deal for Water, Sanitation and Hygiene

On 23 April, Michel Barnier, called for a Green New Deal for Europe urging policy-makers to better protect biodiversity and to ensure that Europe becomes a carbon-neutral and circular economy. I fully support his goal “to make Green Europe the number-one priority for the coming years” but would like today to look at Europe’s responsibility when it comes to climate change from another angle.

High-income industrialised countries are overwhelmingly responsible for global warming and it is their duty to support low income countries in becoming more resilient and adapting to the climate crisis. For instance, Africa is expected to warm up to 1.5 times faster than the global average while the continent accounts for only 2–3 per cent of the world’s carbon dioxide emissions from energy and industrial sources. Communities in low income countries who have done the least to cause carbon emissions, are already the ones paying the price.

WASH is crucial to any adaptation effort because without access to basic services people are unable to adapt to any changes.

UN Water has estimated that 3.6 billion people lived in water-scarce areas in 2016, a number expected to increase to around 5 billion by 2050. Increasing scale and frequency of droughts means that women, who disproportionately bear the responsibility of fetching water must walk longer distances to collect it. But climate change also leads to more floods and if toilets and sewers are not made to withstand flooding, risks of diseases spreading increase. Indeed WHO estimates an additional 48,000 deaths per year due to diarrhoea caused by compromised drinking water supplies.

Homes, schools, health centres and WASH infrastructures in disaster prone areas are at risk of damage during extreme weather events, such as hurricanes or cyclones. Furthermore, climate-related disasters overall put healthcare facilities under additional strain. If they are not equipped with WASH (which is often the case as demonstrated by recent JMP figures), it is even more difficult for the health sector to provide safe care to victims of disasters. 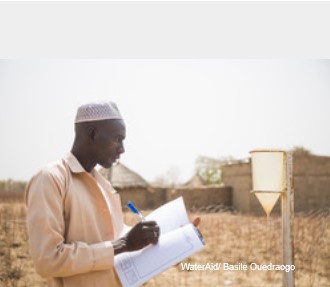 WASH infrastructure that is climate-resilient and efficient WASH services reduce the overall disease burden experienced by poor and marginalised communities, meaning they are better able to cope with increasingly severe weather.

There are many initiatives and programmes the EU and other donors should invest in. Here are a few examples:

However, adaptation to climate change impacts cannot only be about technical solutions.

It also requires continuous efforts to make sure that people living in areas affected by climate change are not denied their human rights to clean water, decent toilets and good hygiene. This involves:

Emphasis also must be on ensuring that the institutions and finances are in place to renew infrastructure and services when they are damaged or destroyed.

So, how can the EU help?

The EU is one of the strongest promoters of the Agenda 2030. Sustainable Development Goal 13 (climate action) calls for stronger resilience and adaptation to climate change as a pre-requisite to achieve and safeguard sustainable development. The EU has also played a key role in the negotiations leading to the Paris Agreement and is in a position to take leadership on the fight against climate change at global level.

However, to be impactful, it is critical that the EU budget for the next seven years enables the union to support climate change adaptation plans in low-income countries. I am grateful that in one of its last votes of the current legislature, the European Parliament called “for actions and measures contributing to meeting the target on climate [that] put special emphasis on support for adaptation to climate change in poor, highly vulnerable countries, and take into consideration the relation between climate, peace and security, women’s empowerment and the fight against poverty”.

Through the StandUp4Water campaign, I call on candidates to the EU elections to raise awareness on WASH as essential elements of climate change adaptation and to ensure that climate finance investments are also used for adaptation. Newly elected MEPs should in particular encourage governments to operationalise and integrate WASH services into all national climate and disaster risk reduction programmes and strategies and ensure that international climate financing is invested in adaptation and resilience measures.

Yes, it is critical for Europeans and for the world that Europe becomes a carbon-neutral and a circular economy. But it is equally important for Europeans and for low-income communities in regions already affected by climate change, that the EU takes its responsibility seriously by massively investing in resilient WASH infrastructures and supporting its partner countries across the world in strengthening WASH services.